The ongoing war against daughters in India

629’000 girls (aged 0–6 years) are estimated to be missing in India every year. The majority of them are aborted, others are killed, abandoned or neglected to death just because they are girls. The roots of this problem lie in a strong patriarchal society that has translated into an obsessive preference for sons and discrimination against girls.This is an analysis of the problem from the inside, a research of reasons and related factors to draw a picture of the foeticide and infanticide in India.

Explore
Every 50 seconds a parent in India kills their daughter
Daughters are
Daughters are killed because
We accept the first girl, the second should be killed, then the third will be a son.
— Rassamal, a traditional healer. She gives advices how to kill unwanted children
[1]

The first girl is usually allowed to live. Also for girls born following a boy the biological ratio (on average 96.2 girls per 100 boys) is respected. But in families with a firstborn daughter, a second girl has less chances of being born, a third girl even less.[2]

Families can usually afford to pay only one dowry*, therefore they don’t want more than one daughter.

*The payment of dowries has been illegal in India since 1961 (Dowry Prohibition Act), but this practice remains widespread across castes, religions and education levels. 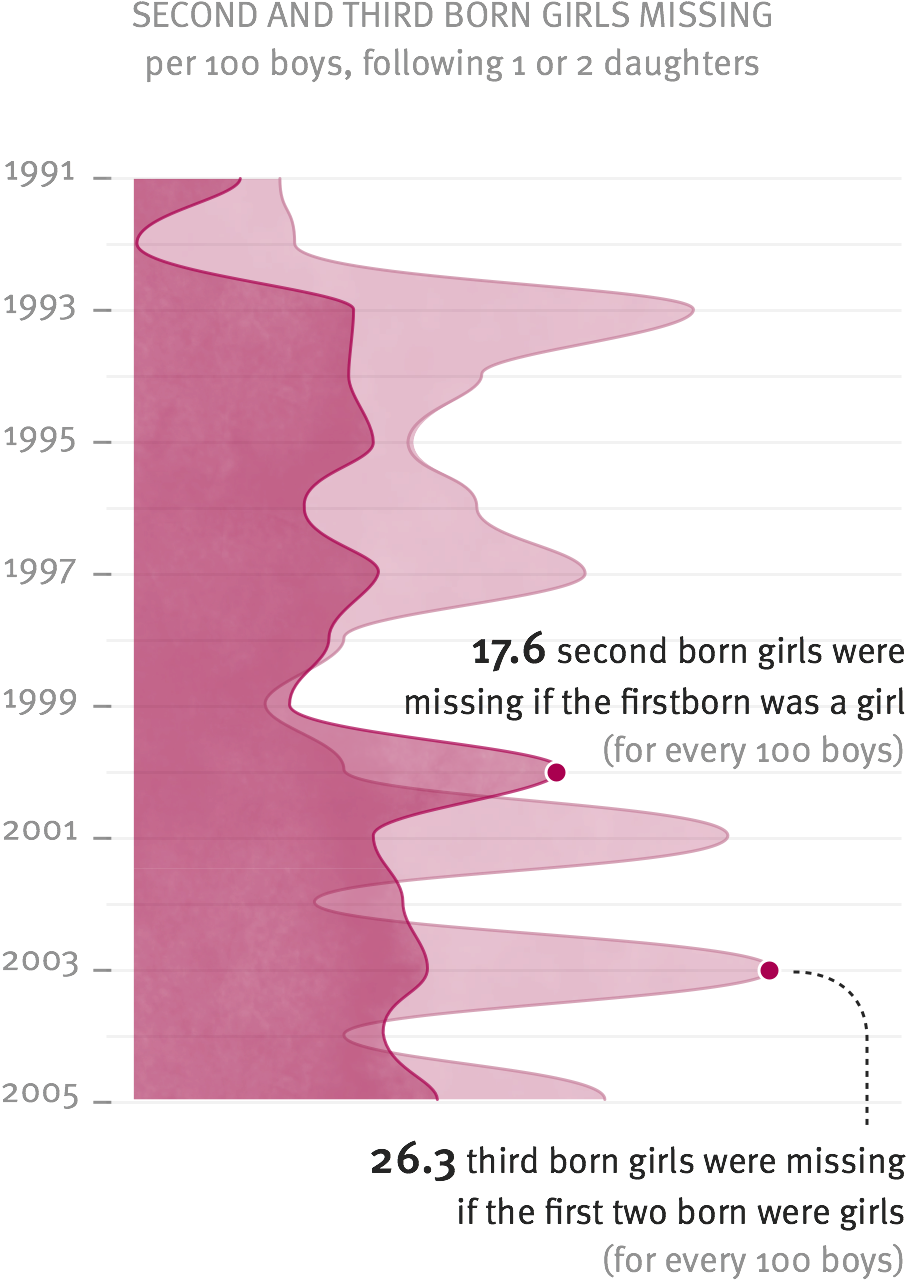 The taunts from society and from my in-laws that I would have faced for not having a son forced me to abort.
— Woman from Rohtak (Haryana), from an educated and affluent family.
[3]

Chances of survival for a second born girl after a first daughter are less if the family is well educated and rich[2]. These families live in urban areas where they have access to ultrasound scans and can afford the price for the abortion. Although prenatal sex-detection and sex-selective abortion is illegal*, many clinics provide these services.

In poorer communities, where there aren’t many ultrasound clinics, daughters are instead abandoned or killed after being born, or lost through neglect.

*With the Medical Termination of Pregnancy Act of 1971, abortion in India became legal up to twenty weeks and under specific conditions such as medical risk to mother. Gender-based abortions have been illegal since 1994 with the Pre-conception and Prenatal Diagnostic Techniques (Prohibition of Sex Selection) Act.

We knew the doctor at the scan centre and went to the clinic that he suggested to have the foetus removed. The next two times were also okay.
— Renu from Chandigarh (Punjab and Haryana), who had four abortions in five years.
[4]

The number of missing girls has increased between 2001 and 2011 census, becoming a substantial problem in northwestern India.

In southern and eastern states women have a more active role in the economy especially in country’s farm production. In these communities women are less discriminated and daughters are more appreciated.[5] 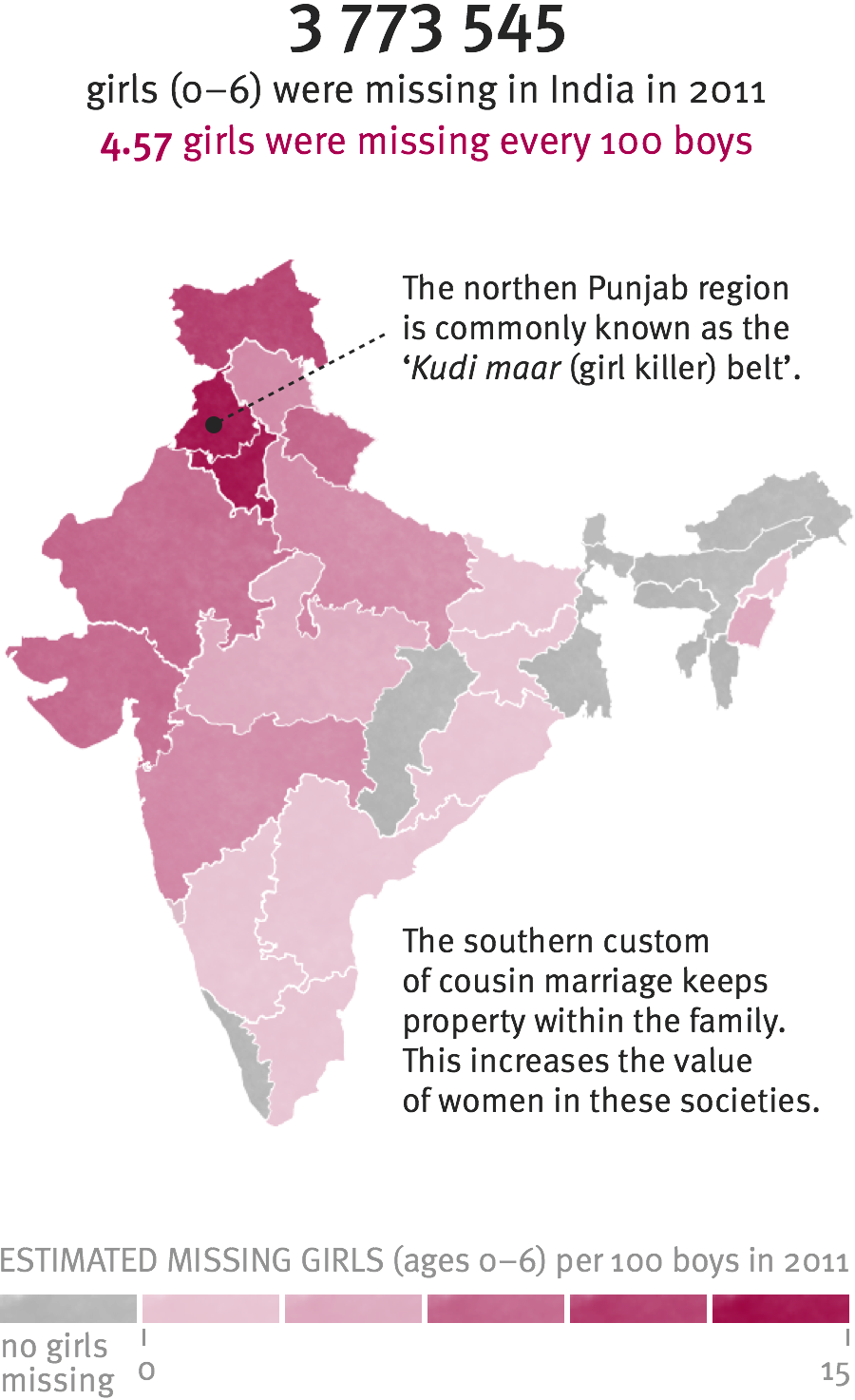 My husband didn’t want another girl. When I was five months pregnant I was forced to abort. (In his eyes) girls would depart and the money would leave with them.
— Pooja Salot from Ahmedabad (Gujarat), who was married to a multi-millionaire industrialist and came out against in-laws forcing abortions.
[6]

As India’s economy is growing a new middle class is emerging. These families prefer fewer children and want a son to take forward their business.Worrying trends can be observed in states like Uttar Pradesh, Maharashtra, Rajasthan and Jammu and Kashmir.

Improvements in Punjab, Haryana and Himachal Pradesh can be attributed to a ‘mature middle class’, financially more stable and open to have daughters.[7]

If this can happen to me it can happen to (my daughters) when they grow up. And that is the reason I’m fighting it.
— Mitu Khurana from new Dehli, RTI applicant and activist who sued her in-laws for having illegally determined the sex of the twins (females), pressured her to abort them and, when she refused, tried to kill the girls.
[8]

Help India’s daughters to bring attention to the issue and raise global awareness.
Every 50 seconds a parent in India kills their daughter – learn more about this ongoing war against girls. https://unwanted.interactivethings.io

Feel free to download and use the charts below on your blog, article, report or research paper.